On September 15th, 2012 Jimmy Garoppolo visited Hancock Stadium at Illinois State University as the starting quarterback for the Eastern Illinois Panthers.  Who knew that 8 years later he would become one of 2 starting quarterbacks in the NFL's SuperBowl.  Jimmy of course is the 2nd starting Quarterback from Eastern to do well.  Ten Years before, another named Tony Romo completed his senior year at Eastern.  Tony went on to an NFL career with the Dallas Cowboys.
Freelance photographer Alan Look was fortunate to have captured both players in action.  The image of Tony Romo was taken at Eastern during the Homecoming game in 2002 against the Eastern Kentucky Colonels.  The image has been used by national media and in several books.  The images of Jimmy Garoppolo were both used by Upper Deck as trading cards for his rookie season. 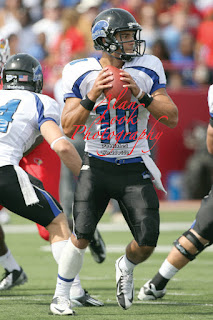 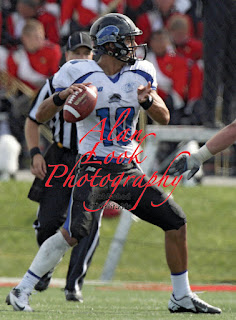 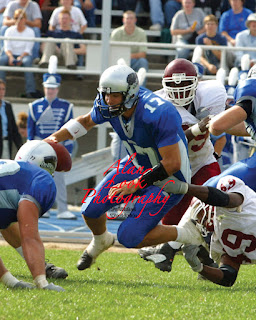 Posted by Chimper at 8:04 AM No comments:

On Saturday UCF took on the Illini in a morning match.  The Illini fell once again moving their record in the tournament to 0-2 and setting UCF's record to 1-1.  The evening matchups included a 5:30 match between UCF and Illinois State and the nightcap was Marquette and the Illini.  Both matches went 5 sets, both thrillers with ISU taking the win over UCF and the Illini besting Marquette.

Sunday afternoon, the final match between Marquette and Illinois State was nothing short of epic.  Marquette opened by taking the first set.  ISU returned to the floor for the second set with an improved look, taking it to tie the match and then coming in the 3rd set to take 2 straight both at a score of 25-18.  Marquette struggled back in the 4th set to tie the match and forcing the 5th.  The score in the 5th seesawed back and forth past the normal 2 ahead at 15 to win and eventually ending at a score of 21-19 with Marquette on top. 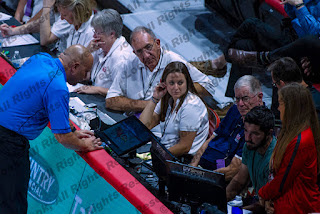 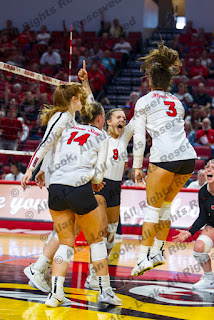 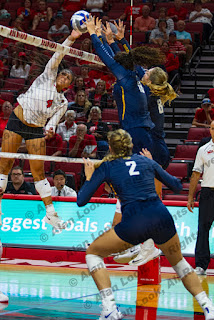 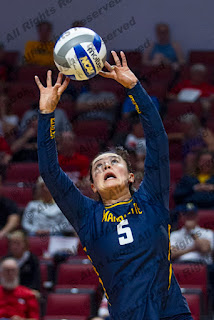 There was some really great volleyball played this weekend.  We encourage everyone to get out and see these teams.

The local football season kicked off today with the Illinois State Redbird Red-White scrimmage.  A healthy combination of fans and students attended the event and the preliminary activities which included the annual student promo photo on the field in Hancock Stadium with the Big Red Marching Machine, cheerleaders, flag corp, and Redline Dancers forming ISU all wearing red shirts.

High School football will follow in 13 days with the first Friday Lights games.

Get out this fall, support your local teams and see some of the great talent that passes through our communities!

Red-White game gallery
Posted by Chimper at 6:36 PM No comments: 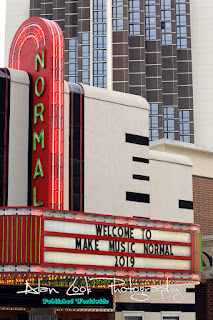 To many of the festivals hosted in Normal, the Make Music Normal festival is pretty young.  That doesn't keep it from being a great event.  The festival set in the more mature business district of the town provides an inviting rustic, quaint and appealing venue.  The festival seems to be growing every year.  This year it sported 6 stages in about a 3 block area of North, Broadway and Beaufort streets, including the round a bout area.  Providing the entertainment for the festival are a large number of bands from both the twin cities, central Illinois area and the nation at large.  The festival gives music lovers a place to see the local entertainment outside the usual bar and restaurants and without a cover charge.  Along with the entertainment are a number of vendors selling assorted eats and drinks, including wine and beer.  The music genres are varied and include something for just about everyone.  Folk to pop to rap to indie rock and country music and more are present.  If you don't like what's on one stage, just walk down the street to another stage!
A few local favorites we experienced were:
Old Smoke refers to themselves as an American Blues Rock Band.  Members of the band are: Jessica Wheet, Adam Humphreys, Heath Brandon, Chris Lackey and Travis Wheet.

Wildermore, playing funky jazzy rock is made up of Dave Gueldenhaar with guitar and vocals, Matthew Gueldenhaar playing keyboard and vocals, Zak Hoffman on drums and vocals and Aaron Wissmiller on bass and also contributing vocals.

A big fan favorite and one of ours is a storytelling Chicago Farmer, a singer songwriter raised in Delevan now from Bloomington Normal.  Chicago Farmer will bring memories and correlations of Bob Dylan and Neil Young.  Cody Diekhoff is the Chicago Farmer.

The Neals - a wife and husband team from Hudson.  The Neals perform a lot of original material in two part harmonies and would be considered in the indie-folk genre.  Tommy and Breann Neal are The Neals.

Long time staple Mark Boon.  Mark does a variety of different tunes.  He performs solo and also with various groups and is widely known for his association with the Unknown Legends.

Geoff Beran and the Mystery Van are an indie-pop band that put on an exciting up tempo show.  The group consists of Geoff Beran, Jeff Walker, Ken Thornton and Ryan Howes.
Posted by Chimper at 9:48 AM No comments:

Sports fans love a good player tribute or memorial.  They flock to places like stadiums, the various hall of fames, hometowns of heroes and museums to see artist’s renditions of the athlete and their careers.  There are simply hundreds of places to visit to pay homage to the many great athletes of the world.  Bloomington Illinois has added a venue in Evergreen Memorial Cemetery!  A cemetery is not your standard variety venue.

Many cemeteries feature stone art.  Many old stones were carved with scenes of nature or animals and the way those are depicted generally has a meaning.  There is some of that art in Evergreen Memorial, but there is also new art that just grows with the trees.  It all began in 2015 when a tree died near a spot where a plane had crashed during the Memorial Day ceremonies of 1948.  Instead of cutting down the tree and removing the stump, management decided to have it carved into a memorial commemorating that crash.  A carver was hired and when completed, a replica of the plane that crashed adorned the top of the stump that remained after removing the damaged portion of the tree.

So started a tradition has Evergreen Memorial on the way to becoming more than a final destination.  Now the cemetery is a favorite local destination for viewing some nice chainsaw art carving.  The second creation is near the grave of Dorothy Gage. Bill Baker of Top Notch Chainsaw Carvings completed a carving of Dorothy from L. Frank Baum’s Wizard of Oz in 2018.  Gage was Baum’s niece and was the person he named the character after.

Bill Baker carved two more memorials in 2019.  One is of an infant in a tree also near the grave of Dorothy Gage, the other of Charles “Old Hoss” Radbourn who is also buried in Evergreen Memorial Cemetery.

Radbourn was born in Rochester NY in 1853 but was raised in and called Bloomington home.  He spent 12 years in Major League Baseball with the Buffalo Bisons, Providence Grays, Boston Beaneaters, Boston Reds, and Cincinnati Reds.  He passed away in 1897 and was inducted into the Baseball Hall of Fame in 1939.

Bill Baker related that the carving of Radbourn was interesting because most of the photographs he used as a reference were taken from the waist up.  Only a couple full-length shots seem to exist that Baker was able to locate.  Baker also states in a social media post about this carving that an imperfection in the old tree used for the carving was located in the exact spot of the left eye.  Imperfections aren’t unusual, but his further research revealed that Radbourn was blind in his left eye after a hunting accident where he was accidentally shot by a friend.  In Bakers words, some things were meant to be.  The eye imperfection remains in the final works.  Other details of the art are a wooden bat placed against Radbourn’s right hand and BOSTON on his jersey.  Several parts of the work are blackened to give it a more lifelike appearance.

Evergreen Memorial Cemetery is home to a lot of old oak trees and the property is the final resting place of many of Bloomington, Normal and McLean Counties prominent historical figures as well as many historical characters.  The families of Supreme Court Judge David Davis (a friend and confidant of Abraham Lincoln), Adlai Stevenson, the Gridley’s, the Funks, Sergeant Joshua Rodgers and others are all laid to rest here leaving a variety of material, personalities and memories to be commemorated and carved.

More images of the memorial to Charles Radbourn can be found here:  https://alanlook.photoshelter.com/portfolio/G0000VI_GJst9ZUY/I0000nQhxx2t8zmE 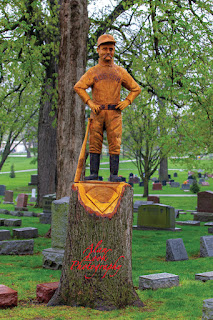 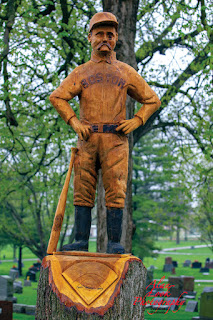 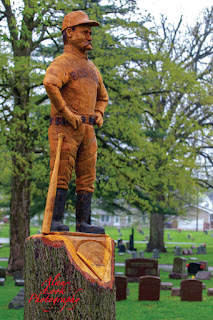 Posted by Chimper at 5:32 AM No comments:

The Missouri Valley Conference men's basketball outcomes have been absolutely unpredictable this season.  A few games back, Illinois State defeated Loyola to take the lead in the conference.  Last night they lost to a struggling Bradley team.  Actually, Bradley has been staging a bit of a comeback the last few seasons, albeit a slow one.  But, nothing seems to happen overnight with maybe the exception of the Loyola Rambler cinderella team last season...Devine Intervention?

The game has always been a rivalry, but in recent years it's been beat up.  This game, 9000 people filed in to the 'nest' to watch the game.  Some accounts say the contingent of Braves fans that travelled 40 miles from Peoria were more energized.  Maybe so, so much red in Redbird that I couldn't tell the fans apart by just looking up.  Still, the rivalry wasn't like it was in its heydays a dozen plus years ago when the thunderous crowds could have been heard halfway to Peoria... the years my ears would ring for days and I'd swear I'd wear hearing protection the next year.

Enough of my ramblings...  The Valley is truly up for grabs this season.  Arch Madness is going to have to sort it all out.  Here's to hoping the 'Birds are healthy and bring their best game.

Posted by Chimper at 6:22 PM No comments: 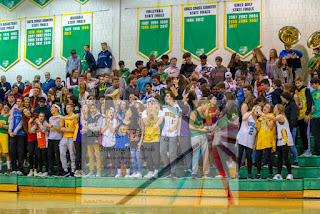 In a conference game and on Senior Night at University High, the Cyclones of Sacred Heart Griffin whistle past the Pioneers 71-46.  The Cyclones started quickly and moved to an 8 point lead before the Pioneers could muster a single point and that one from the charity stripe after a missed layup.  I don't watch the scoreboard closely or read the stats, but it didn't appear the Pioneers ever came within 7 the rest of the game.  They did put together a few nice runs, but it was just never enough.

Posted by Chimper at 8:22 AM No comments:

Great places on the Web